In May we observe several important events: Mother’s Day on May 9, Ascension Day on May 13 and of course the Arizona State Convention May 21-22. 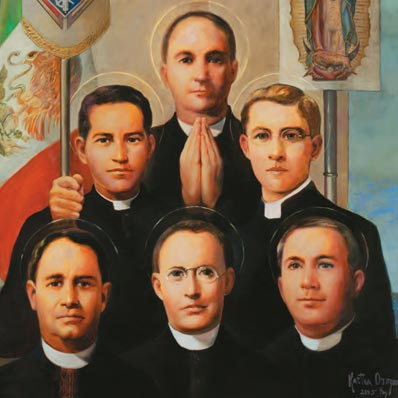 But did you know that on May 20 we honor the Knights of Columbus Mexican Martyrs?  From the May KOCOA:

“Missionaries were expelled from the country, Catholic seminaries and schools were closed, and the Church was forbidden to own property. Priests and laymen were told to renounce Jesus and their faith in public; if they refused, they faced not just punishment, but torture and death.

During this time of oppression and cruelty, the Knights of Columbus did not retreat in Mexico, but grew dramatically from 400 members in 1918 to 43 councils and 6,000 members just five years later. In the United States at the time, the Knights handed out five million pamphlets that described the brutality of the Mexican government toward Catholics. As a result the Mexican government greatly feared and eventually outlawed the Order.

Thousands of men, many of whom were Knights, would not bow to these threats or renounce their faith, and they often paid with their lives. They took a stand when that was the most difficult thing to do, and their courage and devotion have echoed down through the decades. ”  — KOCOA May 2021

Read more on the K of C Web site.

The Diocese of Tucson is planning a series of week-long retreats for young people called Prayer & Action, A Call to Serve, A Call to Love. Click the image for more information and a downloadable PDF registration form. 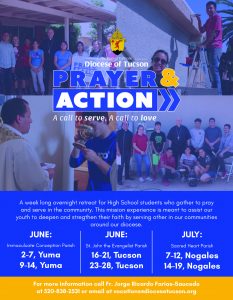